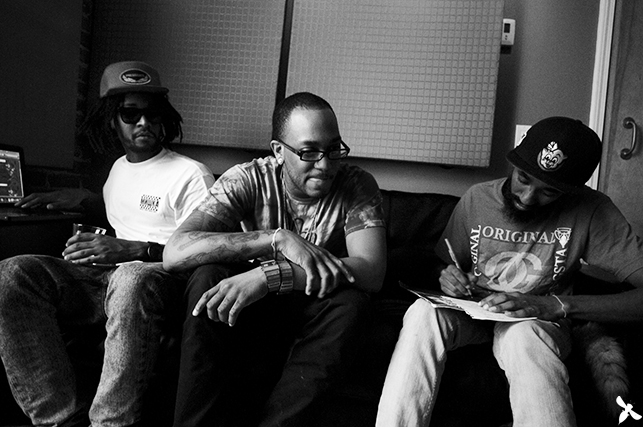 We recorded this session during Pitchfork 2010, during a hectic Friday afternoon.  The night before we had our first Digital Freshness at Beauty Bar with Freddie Gibbs, and this sessions was actually set up around 3AM after the bar closed and craziness subsided.  Ninjasonik was not playing at Pitchfork, but they had a couple after parties and were in Chicago for a few days hanging with Million $ Mano and Hollywood Holt, friends and crew members that shared a relationship that existed way beyond the music.

It was Mano that pushed to make this session happen even though I was initially hesitant because of Digital Freshness and the day’s other session with Freddie Gibbs and YP, and our party the next day with Yelawolf.  The grind won out, and after just a few hours of sleep, we hit SoundScape to record with Ninjasonik, Hollywood Holt, Mano, and Roofeeo, who was serving as Ninjasonik’s DJ that weekend.   I’m glad we did.  The resulting record, “This Is How We Treat’em” is one my favorites from the project, and given everything that’s happening now with the Treated Crew, Ninjasonik and Roofeeo, it serves as a foreshadowing piece of history.

“How We Treat’em” is the fourth release from Closed Sessions Vol. 2, the new album and documentary series from the independent Chicago-based Hip Hop label Closed Sessions.  The album will be released as a free download later this month presented by rubyhornet, SoundScape Studios and MTV2 Sucker Free.  Download the new single, and watch the documentary below.