Coffee With The Rza… 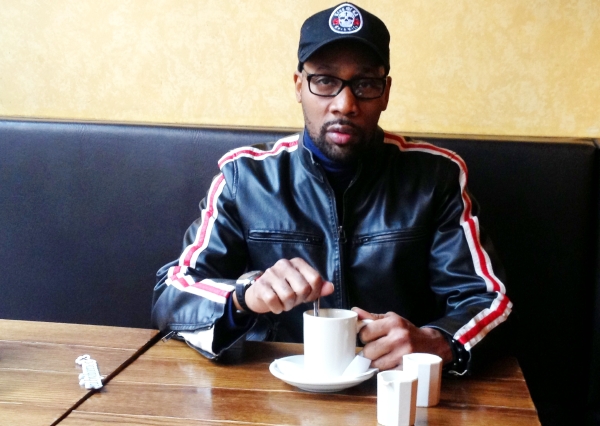 It pays to be early sometimes.

I had an interview with Rza yesterday. It was scheduled for 12pm at the Double Door.  In the hours before the interview, it was raining outside, and a little cold. Perfect weather to not be doing interviews at the Double Door on a Saturday, especially when your apartment has coffee, old Law & Order episodes, and plenty of good refreshments (virtual wink-wink).

I got to the Double Door early, only to find that it was still locked.  This was a surprise to all involved, as the people setting up this press day with Rza were outside the Double Door as well, umbrellas in one hand, cellphones in the other.  They were nice too, offering me an umbrella, repeatedly thanking me for being early.  It’s cool, I said, my Saint Alfred Penfield jacket was all the protection I needed.  After a couple calls to someone went unanswered, the production people moved to plan-b, scoping Milwaukee Avenue for a place where we could grab a few words with Rza, who was in town to talk about his upcoming film, “The Man With The Iron Fist”.

People’s Lounge provided what we were looking for.  It was open, it was almost empty, and they turned off the music without acting like jackasses about it.  We setup our equipment at a corner table by the window. A couple minutes later Rza walked in, and eased himself into the booth, ordering coffee with brown sugar.  While I can’t get into the details of the interview or the movie just yet, you’ll have to wait til October 29th for that, I can say that speaking to Rza in the restaurant rather than the Double Door is a small detail that makes a big difference.  The conversation flowed a little better, the room was a little brighter, and we captured a picture that is almost iconic given Rza’s film and music history.  I’m pretty sure Rza did a slew of interviews yesterday, and I’m sure they were pretty good, but none others at a window table with coffee and brown sugar.

It pays to be early sometimes.