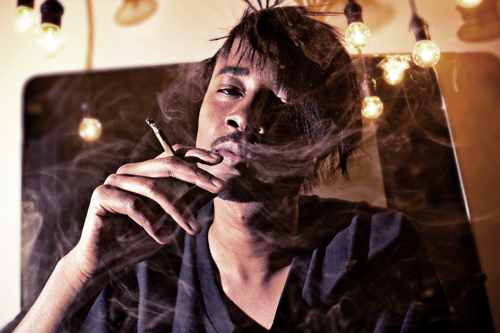 “I played some underground rave s**t, like some straight e-pill popping type s**t,” Danny Brown tells us about his last trip to Chicago a few years ago. “I don’t know if you guys knew that type of s**t went on down here, but it was some type of s**t like that,” he continues, taking a hit from a burning joint just before his performance at our running event series, Digital Freshness.  Needless to say, this performance will be strikingly different than the one Brown experienced some years ago in the windy city.  Beauty Bar is no warehouse, and Digital Freshness is no rave scene, as an eclectic crowd waits for Brown to perform songs off his mixtapes such as Hot Soup, and The Hybrid.

With a musical past dating back to the early 2000’s, Brown is finally stepping into the limelight, receiving the same praise from fans that he’s been getting since in first trips to New York City more than 5 years ago. “Before Hybrid and Hot Soup, I used to come out to New York to record, and Datwon Thomas from King Magazine, he used to always take in my music, then he went to XXL.  He used to always tell me, ‘no matter, what you’re nice. You might be ahead of your time, but people will eventually catch up to your s**t… Don’t stop.’

With an amazing sense of patience, Brown never stopped making music and utilizing the Internet to spread his sounds.  The success of his last offering, Hybrid, and a recent deal with Fool’s Gold Records has Brown in a better position than ever just as the Detroit native hits the big 3-0.  He is embracing his age, and preparing to release a new album soon entitled XXX, which stands for 30 in Roman Numerals.  Maybe Jay-Z was right when he said 30 is the new 20, and even if he isn’t, it wouldn’t matter to Danny Brown who has no plans to stop anytime soon.  With a goal to become a Frank Sinatra like figure, Danny Brown feels like he was born to rap.  It’s a belief that influences everything he does, and shines through in the music that he makes. In the video below he explains how he puts his life inside the lines, and shares more info on his forthcoming project.