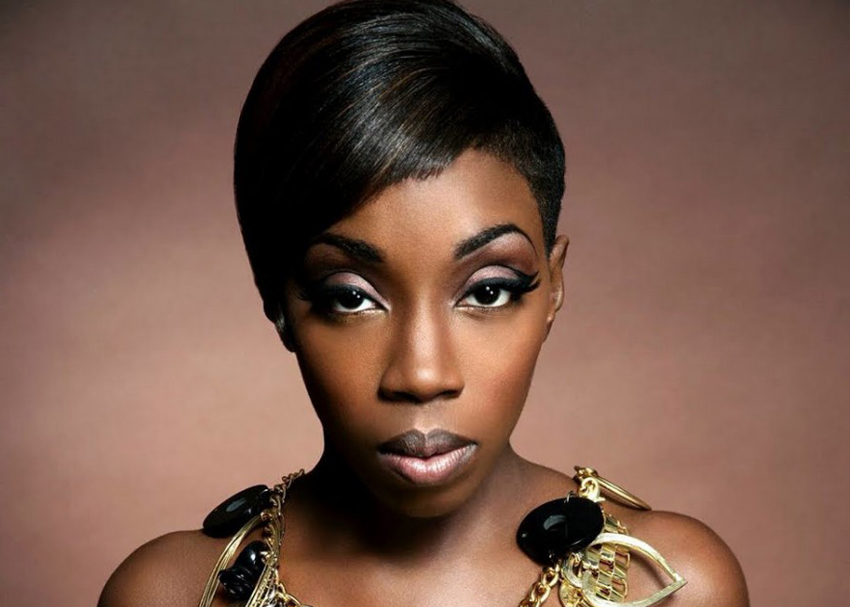 A chance meeting with John Legend and Kanye West at Roscoe’s Chicken in L.A. landed the British singer Estelle a roster spot on Legend’s Homeschool imprint, which will release her sophomore album Shine with Atlantic Records this spring. It’s a good look for Estelle, and a chance for her to reach a whole new audience. While her first album never made it across the pond, it gained her a reputation within the industry. Now Estelle is ready to see the world.

Here Estelle talks about her new album, her growth as an artist, and even sends some praise Ella Fitzgerald’s way.

RubyHornet:  How are the interviews going so far?

RubyHornet:  What’s the question you’ve had to answer the most so far?

RubyHornet:  But that’s an interesting one right?

Estelle:  Not really anymore..yeah…well, I’m sure it is hahaha. I met him at Roscoe’s Chicken with Kanye in LA.

RubyHornet:  That’s what I heard, that’s what I heard. That goes into something I wanted to ask you about. How much do you think of what’s happening to you right now is luck vs. your skill and talent?

RubyHornet:  I think that everyone who is successful in this business is because that’s all they do. They go full out.

Estelle:  Right, and they make it happen.

RubyHornet:  You’ve also gone on tour with Wyclef and learned from a lot of really accomplished and successful artists. A lot of people bring up the big names, but I’m sure there’s been other musicians and artists along the way that you’ve learned something from. Who are your influences and such?

Estelle:  One person that really put me on and opened me up to the whole touring aspect of how you can live as an artist is an artist from the UK called Black Twang. He’s one of the first people who put me on one of his records and put me on the road everywhere with him consistently. I only had one record out and we just traveled everywhere. We just went everywhere. It was crazy. We had fun. That was one person that had a heavy influence on my work ethic and me working right now. It’s just about making it happen. Let’s go, let’s get this dough. That was him. But also, in terms musicians, I love Ella Fitzgerald. Her voice is flawless. And when I get to that flawless point, I might stop singing.

Estelle:  Yeah! Hahah, I doubt it, but I like to say it. I probably won’t. Maybe if I’m bored and s**t I’ll stand in front of a mic with the mic like ten feet away. Like ‘La La La can you hear me? ‘ Probably s**t like that, just like taking a piss on people, like, ‘I can project this far.’

RubyHornet: If you got it flaunt it, right?

Estelle: Right. I’ll be like Ella Fitzgerald. She was definitely one of the ones, one of the reasons.

RubyHornet:  Speaking of that and development and growth, when you listen to your new album how does it compare to your earlier stuff? What has been the growth from album to album, or just in terms of project to project?

Estelle:  The approach has been me being 100% happy with myself. I’m not apologizing anymore for being who the hell I am. I’m not caring, or being worried about what people think of me, just being me. I’m happy with that. That’s been the growth, and that’s been in every single song. I’m not scared to put it out there. I’m not nervous or shy that someone’s going to be like, ‘oh, well you’ve done this,’ or be judgmental of me. My whole thing is, don’t judge me unless you’re perfect. And, lord knows none of us are. I’m just going to put my insecurities and my crazy out there and hope somebody learns from them. I hope I learn from them, s**t.

RubyHornet:  So that’s the message behind the title Shine? You’re just gonna let yourself shine in a sense.

RubyHornet:  I think that’s a human element that everybody goes through, being OK to relax, being OK to be like ‘no I don’t feel like doing anything.’

Estelle: That’s how I get sometimes. Even through those times I know I still got to do it. You may not feel like doing anything, and that’s probably alright, cause it’s your life and you figure out what the hell you want to do.

RubyHornet:  With that and opening yourself up more, do you feel any added pressure? There’s a much wider audience now, I know your last album was UK and Europe only, and this one is global. Are you nervous at all?

Estelle: No. I’m like, ‘Please. Hurry. Let’s go. I want to go and travel all over the world. So many people from all over the world hit me up on MySpace when they I heard I was signed [by Atlantic] and doing all this now. They were like, what are you doing? I loved your first album. I was like, really? You did? I can’t wait to see people I’ve come across just traveling and doing shows and what not and say, I’ve never heard of you till now and now I love it.  I can’t wait for them to get this next album cause now it’s going to be the one they can get without having to go on Amazon or really search it out. It’s going to one that is actually released. I’m happy for those people. I’m happy to see how the s**t I’m talking about translates all over the world. I’m curious about that even.

RubyHornet:  It’s kind of an interesting place for an artist to be in, where you have a chance to really go and almost redefine yourself to a whole new audience even with your previous experience and success.

Estelle:  Exactly. And it’s not going to be too different from the original. It’s just that there’s no fear. No fear, no apologies, no nothing. It’s just 100% me. It feels good. It feels so good. I don’t have to apologize for wanting to rap and sing. I’m not having to apologize for wanting to be a regular human being. They’ve tried to build me into this big thing like ‘yo, she reps the dark skinned girls’and ‘she’s righteous.’ I am nowhere near righteous. When that started I was like, ‘oh hell no. Take me out of that equation. Take me right out.’ It’s going to be fun to see how many other people fill that. I don’t want to give the impression to be this unattainable thing. No. Especially with these musicians now, always trying to preach at you, like the world’s coming to an end. Everyone’s trying to tell you what it should be, why can’t it just be your song? Why can’t it just be some lyric that you thought of the other day that made sense to your life? That’s my thing. Let it be what it is.

RubyHornet:  Speaking of that, tell me this, do you really like American boys, or was that just a lyric?

Estelle:  I do, I do. I’m having issues right now with one so I’m not 100% whole-heart right now, I’m having real issues with that right now. (exhales) I do like American boys, y’all are pretty cute, you’re all right.

RubyHornet:  I’m not sure of the whole American boy image outside of America.

RubyHornet:  OK. I’m going to book a ticket in the near future.

RubyHornet:S  o what else will people hear from you when they hear your full album? How does that song “American Boy” relate to the rest of the album.

Estelle:  That song relates to the album in that the album has four or five different genres of music on it. That’s one style of music, and it’ got some reggae, it’s got some Hip Hop, it’s got some pop music, and it’s got some R&B. It’s got everything. So it relates to it in that it’s a different style of music. It’s definitely not a dance music album if that’s what you’re asking. It’s not a dance music album. It has elements of different styles of music like I said, reggae, Hip Hop, some rock influence. We got some that when we perform it live it turns into a full out rock show.

RubyHornet:  Where can people learn more about you? Are you going to be on any more tours?