Fat Ray and Black Milk “The Set Up” 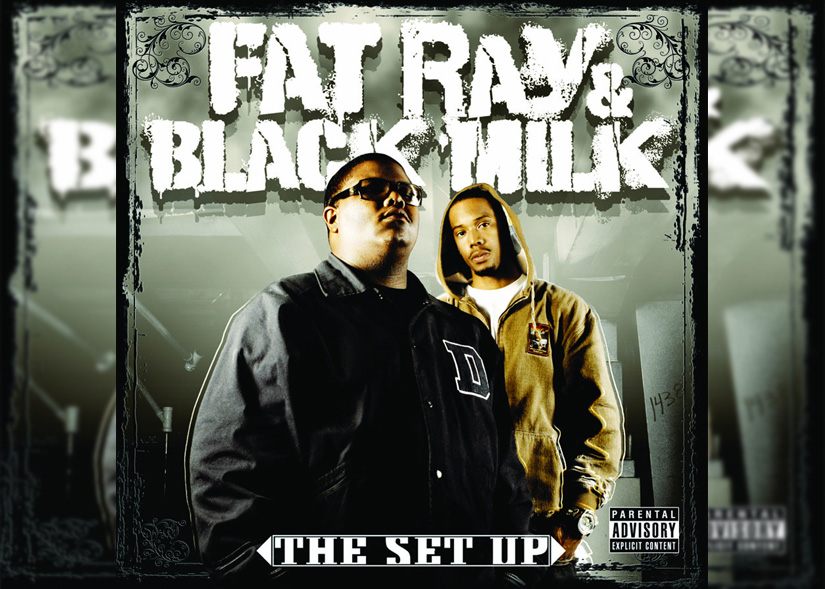 Like a wiley relief pitcher, Fat Ray and Black Milk make it a 1,2,3 inning on The Set Up, a lean 11 tracks of Detroit flavored Hip Hop. The LP show and proves on an aesthetic made famous by J Dilla, and extends the torch once carried by the likes of Jay Dee, and Slum Village and now being handled by Fat Ray, Black Milk, Guilty Simpson and co…Just as the best pitchers stick to their arsenal, Black Milk and Fat Ray successfully do their thing, however, a couple pitches outside the strike zone now and then would add variety and diversity to the record.

The Set Up maintains a minimalist philosophy where less is more, and more is definitely enough. The album’s first joint, “Flawless” makes good use of a slapping beats, guitar grooves and pianos that match perfectly with Ray and Milk’s lyrics. The tone and vibe reached on “Flawless” represents the best of the LP, something that is matched again on standouts such as “Bad Man” featuring Guilty Simpson and Scorpion, “Not U”, and “When It Goes Down.”

Darker joints like “Lookout” featuring Name Tag, which utilizes a Middle Eastern flute sample, “Get Down” and “Take Control” featuring AB add some variety to the album, but they too closely resemble each other, which turns the album almost into an “either-or” listening adventure. The tracks also house gritty rhymes rooted in the daily grind.

It is on “Take Control” that Fat Ray raps, “Might as well face the facts we spit the crack, even Jay-Z had to Fade To Black…Milk that is, till we filthy rich, better make room like 50’s crib.”

The Set Up is an almost filler-free album that is ready built for car rides and smoke sessions. Unlike the title of the first track, the full LP is not without it’s drawbacks. Fat Ray and Black Milk carefully toe the line between musically and lyrically cohesive vs. being repetitive. It seems like Black Milk and Fat Ray have found their zone, where they have comfortably Set Up shop. It’s a good zone to be in, but I believe that the listener as well as the artist could have benefited from more risks on this project. There’s no doubt that Dilla heads will eat this up, but the album is perhaps too deeply rooted in that sound, making it easy for fans and critics to overlook Fat Ray and Black Milk’s uniqueness.

These are definitely two artists with bright futures ahead of them, and hopefully this is The Setup of more to come.

“When It Goes Down”