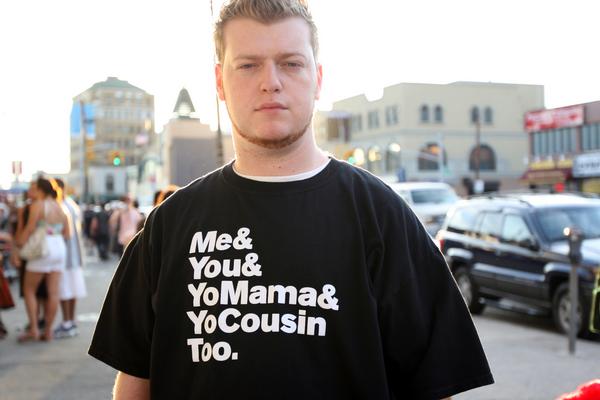 6th Sense is building a very strong underground buzz both on the mic and behind the boards.  After peeping and posting a few 6th Sense joints, we linked up with the NYC emcee/producer for the latest edition of RH First Look.  Get to know 6th Sense below as he speaks on his introduction to music, clears up how he got his name, and explains why he’s the best emcee behind the boards…aside from maybe Q-Tip.

RubyHornet:  What was your introduction into music like?  Do you remember a moment that made you go, ‘I want to produce/rap?’

6th Sense:  I was introduced to music from the moment I was born.  Both of my parents played music growing up.  My mother played classical piano when she was young, most of it self-taught.  My father was a keys player in a few bands in the 70s.  He was a songwriter too, he wrote a song for the Stylistcs, but it didn’t make the cut for the album.  There’s baby pictures of me maybe a few weeks fresh out the hospital with a walkman on.  I grew up listening to everything under the sun.  The Beatles, EWF, The Rolling Stones, Stevie Wonder was one of my favorites.  One of my first words was “Wondie” which was what I called him.  Michael Jackson was the S**T to me.  When I was 4 I performed a Michael medley with the band at my Aunt & Uncle’s wedding, there’s some footage of that somewhere lying around.

I can remember being 10 years old and hearing a verse from DMC that blew my mind away… “My name is DMC, the one you know / The all-time great gonna steal the show…”  I spent all day transcribing the lyrics.  I can remember being 15 down at the Nuyorican Poet’s Cafe for the first time.  That WORDS open-mic with Rocky f**ked my whole world up.  I don’t even think I got on the mic the first time I went.  I had already been listening to hip-hop for quite some time and I had been writing as well, but I remember that night was the first time I said “yo, I LOVE hip-hop.”  The next month I tore it down.

RubyHornet: Your name is 6th Sense.  I’ve read that it is a reference to the song by Common.  Can you set the record straight here about your name and how you came up with it?

6th Sense:  If you read that it’s a reference to Common, all I can say is that you googled 6th Sense.  I’m kidding.  All I can say is I had the name before he had that song, and I even had the name before the movie.  You have to remember I was a young guy at the time. I might have been 14 or 15 when I came up with the name.  My reasoning behind it was that music is my sixth sense.  I think it’s cool that I’ve really grown into the name as I’ve gotten older.  I can be completely sober and feel a genuine attachment to the name.  I mean, s**t, how else could someone like myself be able to do what it is I do?  Gotta be a 6th Sense right?

RubyHornet:  On “I Wanna Tell Ya” Remix you say, ‘the best emcee behind the boards, besides maybe Q-Tip.’  That’s a bold statement, let us know what gives you that feeling?

In hip-hop you kind of have to be over the top and give yourself some real inflating titles.  Cats do it all the time.  It’s something I’ve never really done.  It’s not my style.  The truth is, there isn’t much of the MC’s behind the boards kinda thing.  So I’m just kinda rolling with that.  F**k it.  Naledge was talkin’ a lotta pimpery smack at the end of the remix so I threw that on there.  But I had to keep it on the humble and big up Q-Tip.

If you try to overanalyze it, what does best MC behind the boards really mean?  You’re a dope MC but make wack beats?  You’re a rapper that happens to make hot beats?  Chicken or egg?  Who’s on first?  It’s silly.  But word.  I get very busy on both ends.

RubyHornet:  On “I Won’t Let You Fall” you say, ‘stop, go, what is the attraction?’ are you referring to your attraction to being an artist there?  If so, have you figured it out?

6th Sense:  A lot of times, with a lot of lines I’m talking about a lot of things.  But more than anything, I write for listeners to have their own unique attachment to it.  As relating to the actual song, it’s kind of a weird song.  Like, I sampled Chris Brown for crying out loud, and I knew there was something dope about it, I just didn’t know what it was.  Just before that line, I let the beat drop so there was a “stop.”  And after that line I say “I’m just trying to do my part like a fraction.”  It’s train of thought meets what’s going on in the beat meets life philosophy.

It’s all simple s**t, but at the same time there’s some depth to it.  It can mean whatever the listener wants.

6th Sense:  I can’t really say there’s a certain type of beat that especially drives me as an MC, because I like to experiment and rock over a wide variety of music.  If and when I get the chance to put together a solo album on a grand scale using other producers, you’re going to hear cats that make music with their productions.

A few examples, I’m talking about Organized Noize, DJ Quik, Ryan Leslie.  There’s so many times where I’ll put on the YouTube of Ryan Leslie making “Addiction” just for inspiration.  We kind of make tracks the same exact way except he’s got an arena and I’m playing ball with no shoes on.  I’d even holler at Krewcial Keys & Alicia.  I know if I went in the studio and they played me “Superwoman” just without Alicia singing, I’da taken that in a heartbeat.  And of course, I’d have ?uestlove producing stuff, or The Randy Watson Experience, or the Yessirs, WHATEVER he wants to call it.

On the flipside, I don’t know if there’s necessarily a particular type of beat I’m getting known for.  I can say that more than 3/4s of my stuff is sample free.  People are noticing a lot of my synth work and synth lines.  I don’t know why, but people love it.  I added keys to Snoop’s “Think About It” on the platinum album Blue Carpet Treament. Ha.  I think that because I come from such a long history of doing music with samples and loving that whole style, that I’m able to do keys and synths in a way that sample heads can still appreciate.

RubyHornet:  Talk about Notherground.  Is there a common philosophy or mindset that everyone involved shares?  If so, what would it be?

Notice I didn’t get into the musical aspects, because Notherground is bigger than just musicians.

RubyHornet:  You were one of the first artists to come out with a pro-Obama song.  A couple weeks ago various outlets asked if Hip Hop could potentially harm Obama’s campaign because of such strong endorsements.  Do you think there is any danger there, or that Hip Hop being behind Obama may put off some potential swing voters?

The media and people need to be careful when exploring the affect of hip-hop’s endorsement of Obama on voters.  I feel there’s more undertones of racism than what someone’s taste of music is.  If the media’s going to pose the question then they have to think about the answer.  If you think that hip-hop’s changing a swing voters mind, that’s ridiculous.  Those are the folks that are probably not voting for Obama because he’s black.  I don’t want to go deeper regarding all of that.

That’s why I feel “Ignite The People” is special.  There’s no cursing in it.  It’s for all people, it’s not just for the hip-hop audience.  When Ludacris does a freestyle on a mixtape, that’s obvious it’s for the hip-hop audience.  I appreciate that you called it a pro-Obama song as opposed to a hip-hop Obama track.  We went all around the city, from the Apollo, to Central Park, Union Square, Times Square, Grand Central Station, the NYC subway and it was the entire human spectrum that we connected with.

“You ever think you’d see a white rapper endorse a black president?”  That’s the line right there.

RubyHornet:  In your mind is there a difference between rapping and being an emcee, between making beats and being a producer?  If so, where does that line lie and at what point would you say you crossed it?

6th Sense:  The line between rapping and MCing is fuzzy so I don’t really know.  There’s a definite line between beatmaking and producing and I crossed that line the second I started getting behind the boards.

6th Sense:  A lot.  I’ll be dropping a mixtape in a few weeks called It Is What It Is, which will be a collection of tracks that have already come out as leaks, a couple remixes, guest appearances, and some other stuff.  The incomparable DJ Dub Floyd is doing a whole blend CD of Notherground.  I hit him with a ton of acapellas, I cannot WAIT for that to drop.  You’re going to see me producing a lot of stuff real soon, so just look out for that.

Me and Wildabeast as a duo go by “Both Nice” and we’re dropping an album before the end of this year.  It’s extremely experimental but at the same time it’s very hip-hop.  A lot of times when you see cats making experimental hip-hop they lose that true hip-hop essence.  I’ll put it this way, the album is 15 tracks, less than 40 minutes long, and I think there might be all of 3 hooks on the album.  We’ll be dropping a video promo and the intro to the album shortly and that will give everyone a good idea behind the idea of the album.

You can expect more music from Wildabeast and Jelani as well.  I’m also going to be teaching a creative writing class this fall and I’m working on putting together a pen drive to send pens to Africa.

RubyHornet:  Lastly, for some this may be their first introduction to you.  What are three things you’d like someone to know about 6th Sense before listening to your music?

Thanks to Ruby Hornet and big shout to the whole Chi.  I was there once and it was windy as f**k.  I can’t wait to come back.