[Interview] Beastie Boys: One Generation To Another 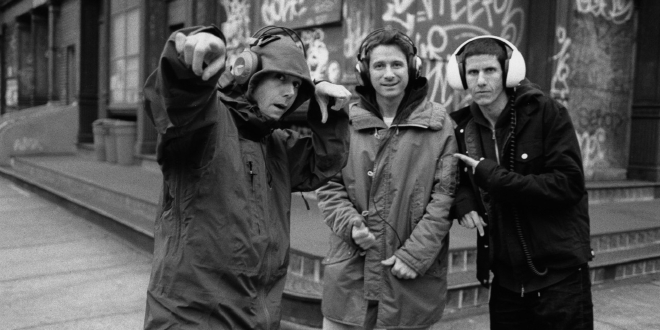 In 2004, just a day after George W. Bush won re-election, the Beastie Boys hit Chicago alongside Talib Kweli in support of their ’04 Hip Hop album, To The 5 Boroughs. At the time, I was 22 and teaching 2nd grade in Englewood on the southside of Chicago.  I was also working at SoundSlam.com, where I would be able to ditch my teacher’s uniform and interview artists like Common, Lupe Fiasco, Wyclef, Busta Rhymes, I even got to interview Tony Yayo (definitely a highlight).  Since I started writing though, shit since I started listening to music, my goal was always to interview the Beastie Boys.  Hands down, they are my favorite band. I have 20 plus Beastie Boys albums full of rarities, remixes, live performances, and more.  I used to scour for TV appearances, and tape whatever I could on VHS, including their appearance on Saturday Night Live as well as Chris Rock’s show back when it was on HBO.

When I was in college, I would call the Beastie Boys Nasty Little Man offices just to hear them say, “Hello Nasty”, after their LP of the same name came out.  I would also email the founder, Steve, and request an interview, even though I really had no place to put it and just wrote off and on for The Hip Hop Congress.  I applaud Steve for answering me though, each week, with the same email of ‘they aren’t really doing interviews right now.’  As an 18 year-old, I was definitely full of optimism.  As time progressed, I did start writing seriously, and SoundSlam began to gain some recognition.  When the Beastie Boys announced a tour with Talib Kweli and a Chicago show at the United Center, we charged up the interview request attack one more time.

To our surprise, we got confirmed for an interview just days before the concert.  I really couldn’t believe it. But there we were, standing outside the United Center waiting for someone to come get us, and take us into their dressing room. Even as we sat there waiting, I didn’t think it was going to go down, but sure enough they walked in, introduced themselves, and sat down just feet away.  We talked to them for about 20 minutes, discussing the 2004 presidential election, Biz Markie’s phone number, and their place in Hip Hop.  After that interview I wrote a poem that started, “At 22 I sat across from the Beastie Boys and talked race in Hip Hop, staring back I saw my own face in Hip Hop.”  Growing up as a Jewish kid in Hyde Park on the southside of Chicago, the Beastie Boys were a huge influence. It felt like they grew up similar to me, and I could use their behavior, respect, and coolness as almost a blueprint for myself.  I’m not unique in that sense, many kids felt that way, which only speaks to the Beastie Boys’ legacy and what they meant for so many.

In celebration of the Beastie Boys and Adam “MCA” Yauch, here is the original interview republished.  MCA, thank you again for everything you have contributed to music and beyond. You are a big inspiration for me as well as many others. You will be missed. Rest In Power.