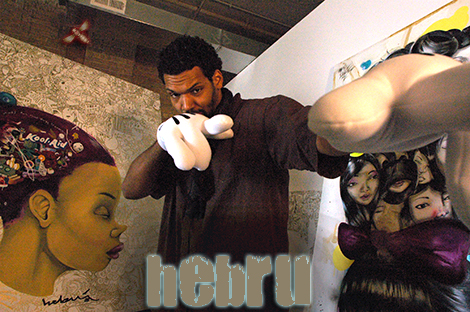 “An artist is someone who constantly creates without having to be told when and where,” says Chicago’s Hebru Brantley. “They do it from the soul.” Hebru Brantley’s personal definition of what an artist is, also serves as a great definition of himself. Brantley, who has been painting for his entire life, has an arsenal of work behind him.  They range from pieces created in numerous art studios, graffiti done on city bricks and concrete, recognized exhibits, websites and portraits on the walls of some of your favorite retailers such as Leaders. A master of many styles, he has traveled from Chicago, to New York to L.A. to express his very interesting artwork.

Hebru never stops creating, and rarely sleeps.  Just Mos Def claims restlessness to be his number one nemisis, Hebru’s main antagonist is time, as there never seems to be enough.  That said, we were able to get the dirty handed painter to put down his brush and answer some questions for us.  Check it out.