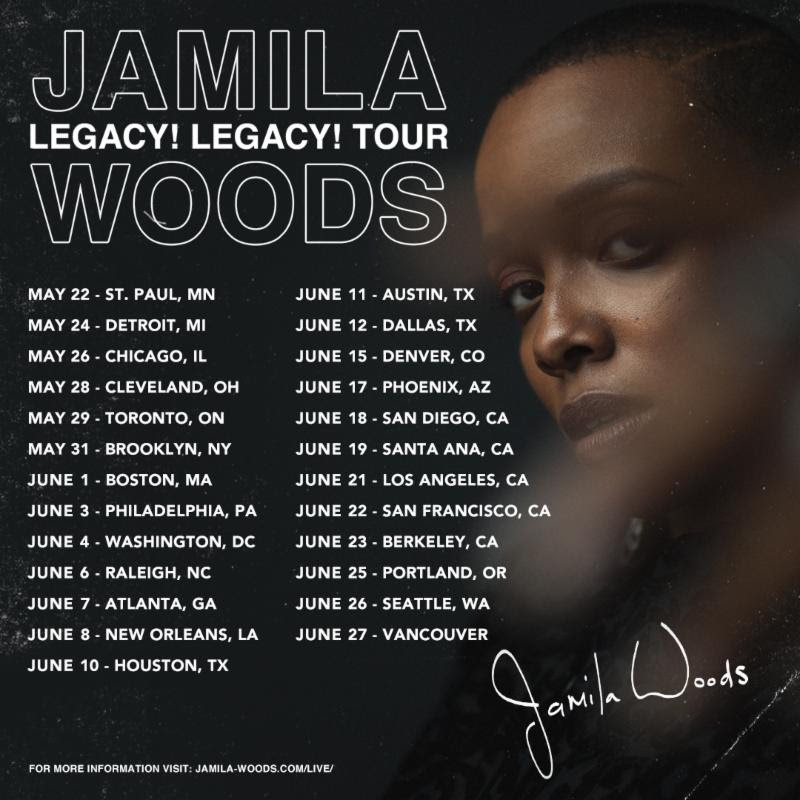 Jamila Woods recently announced her sophomore LP, Legacy! Legacy! and dropped the incredible video for “Zora”. Today, Jamila is sharing more news. Along with the LP, she will embark on a tour in support of the new album. Check out the press release and tour dates below.

Chicago-based soul singer, poet, and arts educator Jamila Woods has announced a national tour in support of her forthcoming LP LEGACY! LEGACY! to be released May 10th via Jagjaguwar / Closed Sessions. Kicking off May 22nd in St. Paul MN and wrapping up June 27th in Vancouver BC the twenty-five date tour will make stops in Brooklyn, Atlanta, Los Angeles, a home town Chicago show and more (full dates below). Tickets for the tour go on sale this Friday, March 8th at 10:00am local time and can be found here. Late last month Woods released the first single for the album “ZORA.” Named for influential author Zora Neale Hurston the video that came with it was filmed in the Johnson Publishing Archives at Chicago’s Stony Island Arts Bank surrounded by artifacts from the historic Black-owned publishing company. Watch the video here.

It’s clear that the album is influenced by many people that inspired Woods over the course of her life. Poet Hanif Abdurraqibpoints out in her bio that ” More than just giving the song titles the names of historical black and brown icons of literature, art, and music, Jamila Woods builds a sonic and lyrical monument to the various modes of how these icons tried to push beyond the margins a country had assigned to them….And so, Legacy! Legacy! A song for Zora! Zora, who gave so much to a culture before she died alone and longing. A song for Octavia and her huge and savage conscience! A song for Miles! One for Jean-Michel and one for my man Jimmy Baldwin!” The album features production from return collaborator Oddcouple along withPeter Cottontale, and up and comer Chicago producer Slot-A with features from Saba, Nico Segal, theMIND, Jasminfire and Nitty Scott.