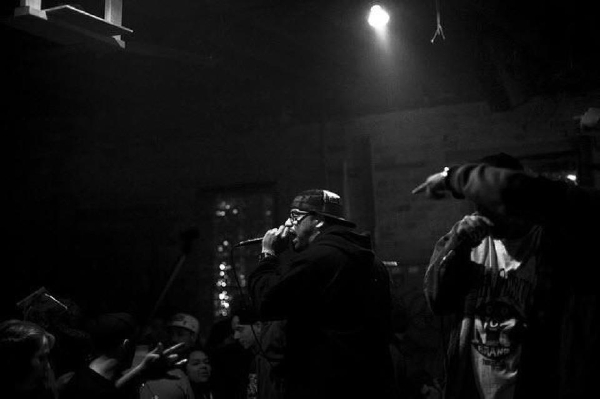 Last week I was on a panel and Greg Corner of Kill Hannah and he asked me about the Chicago battle scene.  I haven’t really kept up with it in a minute, but it got thinking about Chicago’s strong history of battle emcees.  I decided to reach out to Prime, ne of our city’s resident battle historians for an update, as well as a top 5 list of Chicago’s best battle emcees.  Prime runs down the list, which contains a couple locks as well as a surprise nod.

Chicago Battle Emcee. For most heads here, that term can at times be redundant. Chicago Hip Hop has always been about being authentic and having skill; in Chicago we embody those traits. We value true off the head freestyling while others focus on perfectly crafting every little premeditated syllable. We value multisyllable play and wit over shock value and showmanship.  A Chicago Battle Emcee is bred in street battles and molded through constantly having to prove themselves in a city where hate was damn near a badge of honor for years.

DJ RTC and RubyHornet asked me to put together a list of the Top 5 Chicago Battle Emcees…so Here are my Top 5. Opinions are like Battle Rappers so dont lose sleep over mine.


1. MC Juice
Not putting him at the top of any Chicago Battler list automatically discredits the list, as far as I’m concerned. Juice is the best off the head emcee of all time, period.  Juice invented the way alot of emcees battle, stacking his punchlines every four bars to give them proper room to breathe, yet offering a constant barrage of one liners. Every battle rapper after him knows they learned from him….and thats without mentioning the actual street battles and footage that’s not on youtube. My personal favorite was Juice Vs. Rhymefest at the Northeastern, or their subliminal jabs at the Metro. Unfortunately, I’ve never found any footage of it. I was just there. See how many sentences it took me to get to “Oh yeah, he beat Eminem’? That’s because I’ve seen dude do way better than that performance..but yeah, he beat Eminem. As for the SuperNat battle? That just gets a ‘cmon son’ from me. Line for line it’s not even close, but hey I prefer
Louis C.K. over Carlos Mencia.


2. Rhymefest
Professor X had Magneto,  Magic Johnson had Larry Bird, Juice and Rhymefest have each other, The rivalry between these 2 gentlemen set the standard for how Chicago Emcees view their opponents. Always classy, but always willing to take a cheap shot when necessary. What I like about Fest is that he was alway the underdog, but he was focused and let that fuel him. That fire led him to succeed in other areas. Rhymefest is comical, his delivery is playful, and he’s one of the few emcees who can summon a certain Biz Markie feel in his performance. For reference, watch his battle with Swann at Scribble Jam. Or you can look at his shelf for that Grammy. Rhymefest is a beast and ridiculous off the head. Oh yeah, he beat Eminem too.  Chicago Stand UP!

3. Common
I know for some this is a curveball pick, but real hip hop heads know the drill. Ice Cube is and was a BEAST. Every head in the world wanted to grow a jheri curl, wear black and shoot a cop when Ice Cube was RUNNING it. He had Northsider’s wearing Sox hats (..well maybe not to THAT extreme). No one would have bet that some Midwest kid would have the spit game to shut down a legend. Common’s “Bitch In Yoo” is one of Hip Hop’s best battle records. PERIOD. That was Common showing the world that you don’t EVER underestimate a Chicago emcee’s spit game. And just when you thought that everyone’s favorite, rainbow kufi, drape wearing, ubersoft Baduist was out of the game – he dropped 3 ridiculous albums and spanked the shit out of a vegas lounge
mouseketeer we refer to as “Canada Dry” now. “Stay Schemin'” was supposed to be the next hit, until Common sank that titanic with like 12 bars. That’s Common SENSE for you newbies. Get acquainted.


4. Fresco
Had I not put someone from the Grindtime era of rappers, I’d be labeled as a hater or old timer. I don’t front on skills and Fresco’s proven his. He has something that’s hard to teach or develop- actual original humor. Fresco is hilarious and his delivery only accents it. I’ve seen rappers take actual comedian punchlines and make them rhyme, but Fresco is just very observant and good at picking apart weaknesses. He’s had some lackluster showings but his highlight reel is phenomenal. What makes it even better is that he can definitely go off the head and still be funny, as evidenced in his Rhyme Spitter performances. Youtube Fresco and you’ll see what I mean.  Much respect.


5. Young Kannon
I’ll admit I was out of the scene for a bit and there are a lot of really dope Chicago battlers…but Young Kannon has it all.  Delivery, punchlines, presence, syllable play, and ferocity. He is  definitely a well rounded battler and his bar game is ridiculous. A lot of times, emcees will show off syllables as filler because they can’t deliver quality punchlines or keep the attention of a crowd without those kind of tricks. It’s like a Breakdancer only doing power moves….real recognize real. Young Kannon doesnt showboat for the sake of showboating, but he does feed the crowd their red meat. I really don’t think he gets the props he deserves so I put him on here.  Plus he reminds me of someone I know….You can tell he’s definitely street battle tested. If Juice is Jordan, yeah..I’d probably give YK the Derrick Rose props. Get that Championship, g!

Much Respect to Big Kannon, Moodswangz, Qwel, Seel, Matlock, Sam I Am and all the other dope Chicago battle emcees. There are definitely tons of Chicago Spitters that deserve their shine. This is just my Top 5…not including me, of course. lol. I’ll let my history speak for itself. Much respect to RTC and RH for letting me yap for a bit.

Check out me and my team at www.mgmovement.com. Download music and peep the blog!