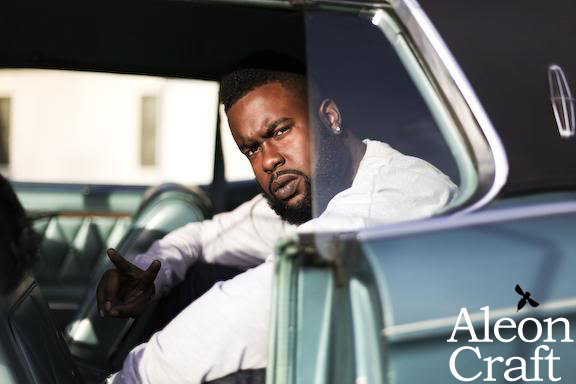 RubyHornet:  I’m told that this is sort of like a reintroduction for you, and in the last couple months you kind of halted things to restart them?  If that’s the case, what are some things you’re changing and what brought on the attitude to chill?  We’re kind of taught to always, always be hustling, grinding etc… But it seems you have to hustling the right way?

Aleon Craft:  I haven’t necessarily halted the grind. I’ve more so just started moving smarter and strategically. And yes, this is a reintroduction of myself. I have grown and matured, mentally and musically.

RubyHornet:  Your name, Aleon Craft, very interesting… When did you pick up the name, and am I right to think it’s meant to communicate that your music is out of this world, or perhaps given to you by a higher power it is in a sense an “alien craft”.

Aleon Craft:  That name just came to me during one of my nightly, star gazing, sessions. Aleon Craft is a term that simply lets you know that my craft/art is outside the box; limitless like the universe; not of this world; alien.

RubyHornet:  Where did your relationship with SMKA start as far as producers/emcees?  It’s really a cool thing when an artist vibes so much with a producer, and sadly something that not every emcee/producer gets to enjoy… Almost the way they picked those flying dog type things in “Avatar”, it just has to be a mutual choice.  What makes the connection w/you and SMKA so smooth?

Aleon Craft:  We meet through music. The 808 Experiment Vol. 1., the song “Caddy’s”. And with 808 Blake being a Decatur dude like myself, we had to vibe out and see what we could come up with…you feel me? It helps when everyone involved has the same goals, which in our case is good music. Staying humble and focused.

RubyHornet:  You were featured on CNN with the Atlanta Symphony Orchestra.  What’s the response been like, good and bad?  I’m sure you had congratulators, but were there others that talked s**t about it, or made you feel like you were selling out?

Aleon Craft:  The response has been overwhelming. I still can’t believe I was a part of that. An amazing experience. If there were people who talked s**t about it, that’s good, too. They’re still doing what I need them to do. Listen.

RubyHornet:  Conversely, were you nervous at all about it, from a style standpoint, or just stepping out of your comfort zone?

RubyHornet:  When I visited Atlanta in the beginning of September, the DJ played one of your records in the club (I don’t even think it was out at the time/may not be out even now).  The club went nuts, and I get the feeling that you’re well known and respected in the ATL.  Where do you feel you stand in ATL’s music scene?

RubyHornet:  Does having such as base in Atlanta, or for any artist to be well known in their hometown have any dangers in your opinion?  I sometimes think that being big locally can give an artist the wrong idea of where they stand overall, and if not treated the right way can lead to a loss of humbleness and a wide array of problems.

Aleon Craft:  I think that depends on the person.

RubyHornet:  Let’s take a step back for a second.  I want you to go back to where you were when you first fell in love with music, and what inspired you to pursue it?

Aleon Craft:  I can’t say when I exactly fell in love with it because I was always around it. I’ve always wanted to do music. Always.

RubyHornet:  You’ve dropped a few singles over the last month or so, please tell our readers what you have coming up.

Aleon Craft:  The Prolouge Pt.1, The Prolouge Pt.2, The Time Continuum or Space Bass (still coming up with the name for it) with Roundtable Kings and Sol Messiah, & last but most certainly not least, The Solar Hop Chronicles.  I just want to take the time to thank SMKA, Esperanza, Roundtable KIngs, N.R.E.G., Sol Messiah, and an extra special thanks to RubyHornet for taking the time out to chat with an Extraterrestrial.

RubyHornet:  Lastly, for some of our readers this will be the first they see of you.  What are 3 things you’d like them to know before leaving this interview to listen to more of your music?