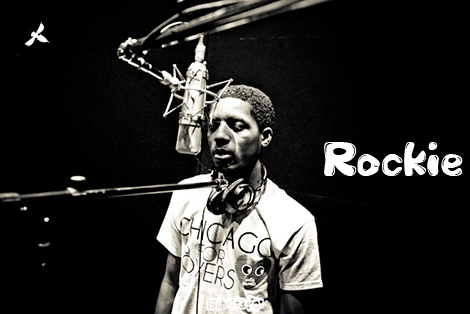 RubyHornet: I read that you started rapping in 2007. That was only 2 years ago. Was this when you first actually began recording, or was this actually when you first began to write down your raps?

Rockie Fresh: I actually started rapping in 2006, but didn’t start writing things down and recording until 2007.  I started freestyling in classes, then moved on to some battles, and finally decided it was time to start taking my music a little more seriously by hitting the studio to record.

RubyHornet: You say that you’re not the thug type or the over bored hipster type. How responsible for this do you think your childhood upbringing was? How was your relationship with your parents and what did they instill in you?

Rockie Fresh: My upbringing definitely played a big role in this.  I went to a Christian school in Chicago from 1st through 8th grade, which was predominantly African American.  Following that, I attended Homewood-Flossmoor High School in the south suburbs, which was far more diverse. I played on inner city youth sports teams, and attended suburban summer camps. My entire life I’ve been interacting with different groups of people from different backgrounds.  These diverse interactions put me in balance between that hipster and hood lifestyle.  As far as my parents, we’ve always had a fairly good relationship.  They’ve encouraged me throughout my childhood to do my own thing, and not to fall towards one crowd or one lifestlye.

RubyHornet: I believe you said you want your music to encourage people to make better decisions and [to be] comfortable with the way they are. How big of an influence do you feel that art as a whole, not just music, has on an individual’s everyday well being?

Rockie Fresh: I would say that art is a reflection of feeling.  People relate to art through how it makes them feel on a daily basis.  There’s almost a process that people go through when interacting with any art form.  If people relate to the art, they take it and apply it to their life until their situation changes, and then they find something else to connect to.  My hope is that my music can become part of that process.

RubyHornet: So your latest project, Rockie’s Modern Life, was just released. Can you elaborate on your ideology behind the entire direction for the mixtape?

Rockie Fresh: The ideology behind the entire project was to show my appreciation for different types of music.  It’s hard to categorize my music as one single type of rap or to say it’s for one specific crowd.  I just wanted to take my experiences, feelings, and ideas and translate them into a form that I think almost any music fan can appreciate.

RubyHornet: On a track called “I’m Gone” on your latest project you describe yourself as an artist who has a variety of sounds.  You say you’re being criticized for making a pop song here, then a Hip Hop track there. How important do you feel it is for an artist to be consistent with his or her sound? Or do you feel it doesn’t carry too much importance?

Rockie Fresh: I don’t think it’s necessary for an artist to be 100% consistent with their sound.  I listen to all kinds of music, and so do most people.  When I look for music, I look for music that I can relate to.  It doesn’t matter if that music is Pop Rock, R&B, Hip Hop, or anything else.  All that matters is what you take away from the song.  That feeling that you take away is due to a mixture of the stye of music and the message put forward. In my personal opinion, if an artist can’t display versatility in their sound, then their sound can become boring fast.

RubyHornet: You then go on to say that you feel the quality of artists that Hip Hop has right now is crazy. You begin to name a few cats like Wale, Asher Roth, Drake, and J. Cole. Just looking at those 4 artists, can you talk a bit more about what they have added that will allow Hip Hop to continue to evolve?

Rockie Fresh: Definitely. These artists are making a name for themselves by relating to people’s everyday lives and are also showing that they are comfortable with who they are. Cudi doesn’t base his music around the typical rap ideologies of money, cars, clothes, and hoes because that’s not him.  People can relate to him because of his lyrical content, the ideas he puts forward in his songs, along with the way those songs make them feel.  It doesn’t take a great rapper, or great flow pattern, to draw that connection with your fans. It simply takes a great artist.  People often confuse the concept of a genre dying with what is really just change.  Yeah, there may be an absence of pure Hip Hop these days, but that’s because it’s turning into something entirely new.  All of these new age rappers are changing the direction of the genre and creating something for our generation to call our own.

RubyHornet: On a track called “Chill”, you tell a story about your friends being shot at party in response to a robbery over a pair of your sneakers. Is this story factual, and if so how has that experience affected your lyrical content to this day?

Rockie Fresh: The story was based off of a dream, but was also inspired by some real life situations.  I’ve lost many friends to gun violence throughout my life, and experiencing that has kept me conscious of the glorification of violence.  I actually cut one track from Rockie’s Modern Life because some of the lyrical content was questionable in that sense.  Although I definitely do rap about some typical Hip Hop themes, I feel like my lyrics are realistic and relatable, and are not over the top like a lot of artists.

RubyHornet: The track, “New Chapter”, really stands out to me. Through your lyrical content, you basically talk about how you’re not understood, and you’re basically introducing yourself to your listeners. Why the title “New Chapter”? Can you explain that for our readers?

Rockie Fresh: Before creating the song “New Chapter”, the majority of people just knew me as Donald Pullen, and never as the rapper, Rockie. “New Chapter” is basically about me starting this new chapter of my life.  The chapter of Donald Pullen becoming the artist Rockie. That’s also the main reason why it’s the intro to my mixtape.

RubyHornet: So what else does Rockie have planned any upcoming features, bookings, etc..

Rockie Fresh: The most set in stone event I have so far is my release show at Reggie’s in Chicago.  The show is on Tuesday, December 22nd, with performances by Big Homie DOE, Dave Coresh, Nick N Beans, Youngsta, Melanie Richelle, DJ Million $ Mano, Vic Lloyd and a bunch of other great artists. This release show is really the proving grounds for me as an artist, so my team and I have our minds and energy focused on that night. Having said that, we are working on some university shows for this Spring so keep a look out for those.  In terms of features, I’m working on some potential collaborations with a few Chicago and DC rappers.  There also may be a few cool non-hip-hop artist collaborations as well.  You’ll just have to keep checking back.  2010 is going to be a big year for me.

RubyHornet: This will work as a formal introduction for you to our readers. Can you name 3 reasons why people should either begin or continue to follow your music?

Rockie Fresh: The first reason why people should follow the Rockie movement is the non-conventional approach that I’m taking to my music career and the way I promote my music.  I make it my goal to only release music when I know there’s someone on the other end ready to listen.  I don’t make mixtape after mixtape, and I will always make sure that my ducks are in line before any kind of release.  Quality over quantity is the name of the game, as you’ll see with Rockie’s Modern Life.

The second reason people should follow Rockie is for my stylistic variety.  I don’t tie myself down to one single sound, and I am constantly working to evolve and better my music sonically and in content.

The third reason people should follow Rockie is that I have a lot in store for 2010.  I’ll be working with the producer, LPeezy, on a new project and my management team is gearing up to make some big moves.  Definitely keep an eye out for updates at http://www.rockieml.com, and be sure to expect the unexpected.