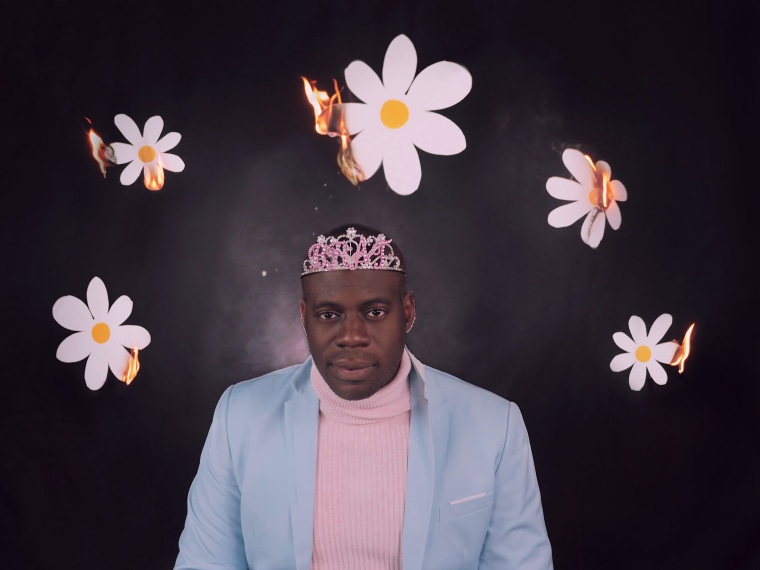 Multi-instrumentalist and rapper, Nnamdi Ogbonnaya, has done a little bit of everything in the Chicago music scene. From his DIY roots in a handful of projects spanning the last two decades, to embracing his own voice as NNAMDÏ onstage, to being one third management of Sooper Records, there is seemingly nothing this man cannot do. You might have even seen him onstage playing bass with indie sweethearts Spencer Tweedy, Ratboys, and Vagabon.

His last full release was in 2017 with Drool, which was fairly upbeat in its rhyme schemes, featured verses, and unconventional production style. Now leaving his twenty-somethings, NNAMDÏ is set to release his fourth solo album entitled Brat on April 3. Rubyhornet had the chance to speak with NNAMDÏ about the upcoming album, his thoughts on being cast into the category of “weirdo-rap,” and his role at Sooper Records.

rubyhornet: Tell me a bit about BRAT and your concepts behind the album, the visuals are very striking and cool on their own.

NNAMDÏ: BRAT… as the title hints, it’s kind of about selfishness or being aware of things you’re doing that seem selfish even if they’re not. Or things you’re doing that are selfish. Yeah, it’s just about that feeling of “am I doing the right thing or not?” And sometimes that can go either way, sometimes you do things because you need to do them. And you might not gel well with other people or what other people’s perception should be. And yeah, just kind of about finding the balance between all of that.

rubyhornet: You could definitely sense that with the lyrics behind “Flowers to My Demons”. I think it is really brave of you to choose that as one of your main singles that you’ve released so far. Was that hard for you to be in the studio and be so out there emotionally or is that something that you’re kind of used to by now?

NNAMDÏ: No, it’s not, it’s not hard to do that because I’m by myself when I’m recording. It’s only weird once it goes out in public, but like making it, it’s not weird. Yeah, it’s not, none of the process is really weird for me because by the time it comes out, in my mind, I’ve relinquished control of whatever I had as my intention writing the song. Because as soon as you release art into the world, your perception of it doesn’t matter. All that matters is like everyone else’s perception, honestly. Um, so yeah, it’s not difficult. Not difficult to talk about.


rubyhornet: So it’s just you in the studio, and you also help run the Sooper label. Is your studio based in your home?

NNAMDÏ: Yeah I recorded the whole thing in my basement by myself, so I was very isolated. It ends up just being hours of me going downstairs and yelling into a microphone. It’s good times. And I get more control that way then.

rubyhornet: Me and the interns were listening to you the other day and we noticed how your production is very guitar-based but not so hard on the beats. Was that intentional for you?

NNAMDÏ: I don’t really have any intention when I start writing music really. ‘Cause it’s something I just do all the time and I, yeah, it depends on my mood of the day. If I want to start making a beat, if I want to start like twiddling on guitar, I’ll put on guitar or whatever, wherever inspiration comes from, then I’ll just let it take me whatever direction it takes. So yeah, I don’t usually think about that too much.

rubyhornet: A lot of articles describe you as “weirdo-rap,” which you’ve spoke about distancing yourself from several times in other interviews. What’s the deal on that?

NNAMDÏ: It’s not even that they’re wrong, it’s just that they’re lazy about it. And if that’s the only thing that you can pinpoint about all of the things that I do is how weird it is, then it’s like, most of the stuff I’ve put out is weird. If people think that’s hilarious, I’m going to put out stuff that’s way crazier than that. Nothing I’ve put out is even remotely weird to me. So that’s crazy. 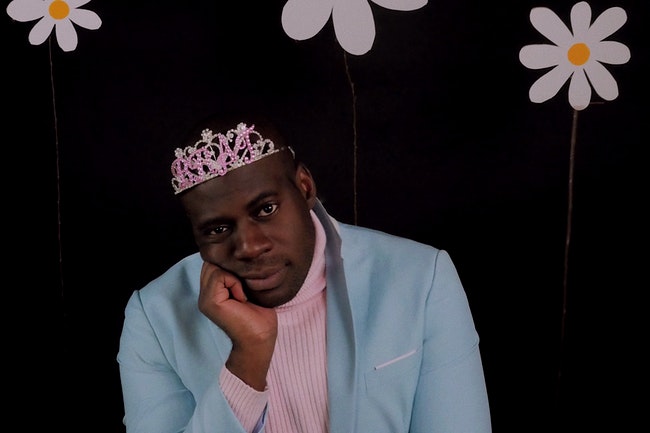 rubyhornet: For sure, and if someone is identified as an experimental artist I think that most of them wouldn’t even publicly term themselves experimental or weird.

NNAMDÏ: Yeah, experimental or quirky people are the ones who put on music that’s abrasive and jarring and noisey. It’s noise intentionally meant to disrupt people’s sense of normalcy. So just to be thrown in this category of “weird” is, I feel like it’s lazy, honestly.

rubyhornet: So you’re dropping a new song tomorrow called “Gimme Gimme.” That’s exciting. Do you think your listeners will be anticipating this song or is it a bit different than what we’ve heard off Brat so far.

NNAMDÏ: I don’t know if people will be surprised, but they definitely won’t be able to be like, ‘this is exactly what I expected.’

rubyhornet: I saw you at the Pitchfork preview show a few weeks ago! You played bass for Spencer Tweedy and Dehd.

NNAMDÏ: I was so nervous about that. I think it’s because his songs are so quiet and every time we rehearse and even perform live, we play so quietly and I could hear everything that was happening. I could hear conversations and just everything at once.

NNAMDÏ: I don’t see why there shouldn’t be. I think if whoever’s comfortable doing whatever, even if it’s, yeah, it’s been done before. Chicago people love to collaborate. Yeah. I don’t know.. I’m trying to think of a good example. Twin Peaks! They do a ton.

rubyhornet: Totally, but also Chicago music can just be a very divided space, especially given the city’s history and everything.

NNAMDÏ: Oh yeah.  I feel like sometimes music can be cliquey by nature and I don’t think it’s everyone’s intention. I think it’s just that you’ve come up with certain people and then of course you want to thrive with them when you start thriving.. Letting in new people is so different. I think it’s just like you start operating with the mentality that ‘these are my people.’ I’m going to work with them and unless we have a connection, and then there’s no one in Chicago trying to force connections. Like that’s shit’s corny as fuck. I feel that if it doesn’t feel natural then people don’t want to do it.

rubyhornet: What are your thoughts on South by Southwest being canceled, were you planning on being there?

NNAMDÏ: Yeah. I wasn’t playing but our label Sooper, we had a showcase of like 20 bands. I feel my label partner Glen he sort of foreshadowed all that. I was just like, nah, I’m not going to worry about this. It’s not in our control, which it’s not. And yeah, they canceled it.

rubyhornet: But you’ve been there in years past?

NNAMDÏ: Three times. Two or three times. I don’t remember, I had fun. It’s a cluster fuck, but you just gotta be prepared. I feel like people go down there expecting ridiculous things like, “Oh, I’m going to meet all these business people and label owners.” And you can, they’re all there, but there’s so many people there. You just gotta be willing to just go with the flow and yeah, it’s good for bands that want to play like four shows a day. That’s what I was doing down there. I was there for four, four days and played 13 shows in four days, which was tight  ….. The first year I wasn’t really getting paid to perform shows either, so I was just like as many people as can see me as possible. I’m trying to sell all my merch. We’ll see what happens and the second year I got some official showcases, so I was getting paid. I was just like, hell yeah, but I still did 12 shows that year. It’s a marathon.

rubyhornet: You’ve got a show coming up at Lincoln Hall. That’s exciting. What can we expect? A full album performance or also old songs keep us on our toes?

NNAMDÏ: Just a good ass show. Having fun friendship. Uh, two openers are like some of the best musicians and yeah, and there will be a ton of very unique people there. We’re all just gonna let go and have some fun. And then I’m going on a tour after that.


rubyhornet: I’m really curious to hear more about how you run Sooper Records and how you operate as a musician-centered label. And your roster is incredible. What’s your role there and how does the business side work?

NNAMDÏ: Well it’s run by me, Glen and Sen. I think Glen does, uh, most of the backend… not backend, what’s the word I’m thinking of? He does more of the inventory and emails and organizing. He’s like kind of a backbone of things. All three of us are musicians, so we come from playing house shows and doing a lot of DIY tours and doing everything ourselves. So it’s cool to link up and yeah, we just know a lot of really cool musicians that are friends of ours. In Chicago, we see dope shit all the time and we just wanted to do it a little bit to help people and put it out using whatever knowledge we could gain. So yeah, it’s all working this far and good so far. We’re learning everyday and we’re a young label I think three years or something.

rubyhornet: What are your thoughts on tape labels?

NNAMDÏ: We released 20 tapes our first year, but we’re kind of moving away from that now. I’m just focusing on single artists, like putting more into them, but I love it. I wish we could do more, but yeah, might get back into it. It’s fun. It’s like very cheap to make tapes and it’s just a good thing for people to sell and not even a lot of people listen to them. It’s just like cool to have.

rubyhornet: For sure, they’re great souvenirs.

Once the interview was over and we stepped out into the pleasant early spring sun,NNAMDÏ squinted, looked up, and roared happily into the void. It was enlightening to speak to a musician with a firm grasp on all aspects of music- from the recording process to the promotional and performance side.NNAMDÏ: is a chameleon when working on his own art in his basement studio and collaborating with those outside of rap.

Although his spring shows have been canceled in light of the spread of COVID-19, BRAT is out on April 3 and you can stream the newest single “Gimme Gimme” anywhere you get your music.