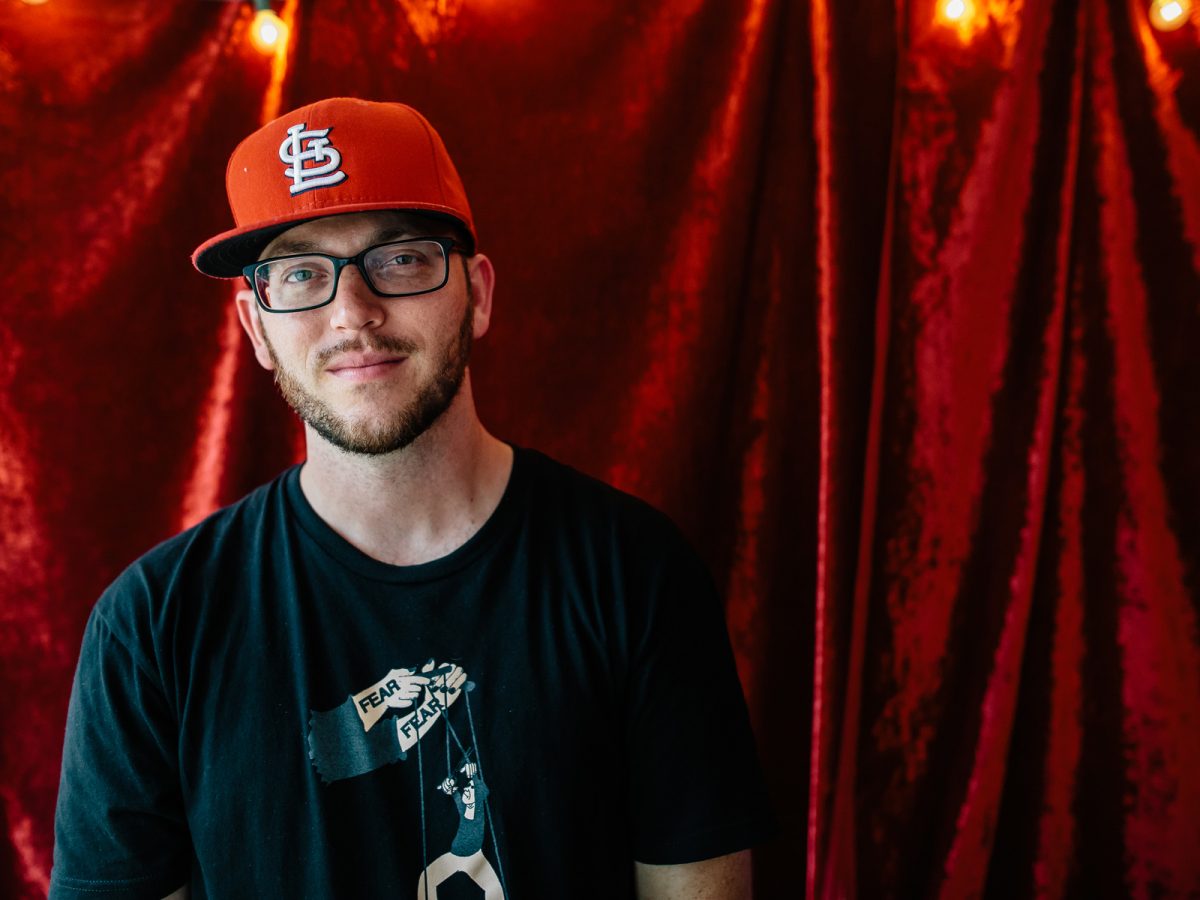 It’s something many aspire to, but few actually touch. Young athletes throwing imaginary passes to Jerry Rice in their backyard, striking out Albert Pujols, or hitting that game winning shot over Michael Jordan in an empty gym.  It’s why Vic Mensa signing to Jay Z is extra special, why Chance working so closely with Kanye West is more than just a regular collaboration. Meeting your heroes is rare enough, being able to work with them everyday and travel the globe is like finding a golden ticket to Willy Wonka’s Chocolate Factory.

Trackstar must have opened up a shit load of candy bars because for him, it is life. Trackstar was born in Madison, Wisconsin and moved to St. Louis to attend Washington University. He worked at the school’s radio station (KWUR), started DJing, and stuck around for a decade pushing the hip hop scene through $1 mixtapes and parties.

As the story goes – in condensed form – Trackstar was a huge Killer Mike fan, made a mixtape of his favorite Killer Mike tracks, gave said mixtape to Killer Mike in person during A3C in Atlanta, and then was immediately rewarded by being offered the opportunity to DJ for Mike at a showcase opening for Rakim. He did that gig, more gigs, and became Mike’s permanent DJ. When Run The Jewels was formed, he took that DJ gig too and hasn’t let up since.

The specialness isn’t lost on Trackstar. In fact, he gives a wink to his fan-turned-contemporary status on the daily with his growing clothing-brand, Rap Fan.

Fresh off a non-stop year of touring with RTJ, Trackstar talked to me about joining the band, his first pair of turntables, and what he’s learned from Killer Mike and El-P.

rubyhornet: Do you remember the thing that made you go, “I want to be a DJ” and cop that first pair of turntables?

Trackstar: I bought my first turntable before I really started DJing, because I was an obsessive fan who got into buying records before I starting spinning. When I first walked into my college radio station, KWUR, and saw the wall of hip hop records I needed to have access to them immediately, so I got a radio show. I only started DJing so I could listen to those thousands of records, lol. After that I got a mixer and second turntable.

rubyhornet: In your opinion, what does it mean to be a DJ? Has your insight changed as you’ve grown?

Trackstar: For me, it’s always been about the love of the music over everything else, having a responsibility to filter through all the music out there, and select what’s the right thing to play at a certain time. I’ve definitely learned a ton, and my perspective has broadened in a lot of ways. But at the end of the day, I just hope that the DJ is always one of the biggest music fans in the room, and that passion is what informs why they do what they do.

rubyhornet: You have been DJing for Run The Jewels since the beginning of the group. I kind of want to know if you were “part of the band” from the start, or if there was a moment when you went from being the RTJ DJ to the 3rd member of the band?

Trackstar: By the time RTJ1 came out, I’d been Mike’s DJ for a couple years, and we had already been on the road with El once on the Into the Wild Tour with Despot and eXquire, so we were all already tight.  It was a pretty easy transition into the RTJ unit, and I’ve always felt like part of the band. It’s a funny dynamic because I am the unofficial third member, and I’ve done every RTJ show that’s ever happened (and hopefully ever will), but technically RTJ is Jaime and Mike. Which is pretty much how it should be—no matter what I may mean to the group and the live show,  at the end of the day Run the Jewels is the manifestation of the amazing friendship between those two amazing dudes.

rubyhornet: The group rose to become one of the most important groups in music over the last few years, equally for the music as well as the messages outside the music. Killer Mike especially was a sought after voice during the election season. What insight have you gained about the social responsibility of artists through your friendship and working relationship with RTJ? Why do you think Mike and El-P hold that deeply, whereas not all artists really pick up that torch?

Trackstar: The thing about those guys and their social messaging is that it’s genuine, and that’s clear from how they express it. They aren’t new to thinking about the way the world works and expressing their viewpoints—they’ve both been doing it their whole lives, each in their own ways, which is true to who they are, and that comes across when they speak on the issues. At the same time, they don’t paint themselves into a corner where that’s their only angle, or where they HAVE to speak or take a position on anything. If you really look at the lyrics, for the most part they really aren’t political—the social commentary gets more press, but RTJ is at least 57% dick jokes.

rubyhornet:  You worked with Killer Mike for years prior to Run The Jewels and I know he was one of your favorite rappers. You made a mixtape of all Killer Mike cuts, which kind of sparked your relationship. What was it initially about his music that struck you so much?

Trackstar: I used to make T-shirts that said “Hip Hop Needs Balance”, and that really describes what I look for in an MC. In Mike I found someone who was smart and had shit to say but didn’t fit into the “conscious” box, and was aggressive and had street cred but didn’t paint himself into a corner as a gangster rapper. I’d heard Monster when it dropped, but didn’t give it the attention it deserved. But from the first time I heard “That’s Life”, it was clear he was instantly one of my favorite MCs.

rubyhornet: Coming up as a DJ, was it in your plans to be a DJ for a Hip Hop group? Was this always something you wanted to do?

Trackstar: Really from the start for me, it was about wanting to help dope music get heard, from bothering my friends to listen to whatever new artist I was hearing, to having an underground hip hop radio show, to making mixtapes showcasing dozens of local artists who I thought deserved bigger audiences. So in a way it makes sense that I’d end up being part of the support system for two of my favorite artists, but honestly I didn’t have any grand ambitions of being a part of anything on this level. I never really thought past being a part of the local scene in St Louis and helping my crew get the love it deserved.

rubyhornet: Aside from being in Run The Jewels, you have your line Rap Fan. What’s it like to essentially run a business from a tour bus?

Trackstar: It can get stressful keeping track of stock and all that but it’s great—RTJ’s merch guy Jordan helps me out a lot and it’s just really dope that people like the stuff I put out there enough to buy it.

rubyhornet: I see the line continue to grow and pop-up in new places, new products, and new fans. From your perspective, why do you think so many people are connecting with it? It seems like there is a “beauty in simplicity” type of thing happening.

Trackstar: Yeah it’s really a simplicity thing I think, which is what I was going for—I wanted to make some merch but didn’t want to make it all about myself, and wanted it to be something that was timeless and would be something I’d still relate to (and not be ashamed of) in five, ten years…nothing had been more consistently central to my life than my status as a fan of hip hop, so Rap Fan just made sense. Fortunately a lot of people seem to relate, which has been really gratifying to see.

rubyhornet: You do a lot of the cuts and scratches on RTJ records, who are some of the turn-tablists you look up to and have studied?

Trackstar: Honestly I’ve never been focused on turntablism. Scratching was never my main thing, but I’m doing my best to do a respectable job, especially since so many of the kids seeing our shows have hardly ever seen a rap group with an actual DJ who scratches! Shadow, Z-Trip and Q-Bert all have joined us onstage, which is insane because they’ve all been influences since before I even started DJing…those guys, Cut Chemist, the Beat Junkies and a thousand people I’m leaving out were huge for me. But really my biggest influences were all St. Louis DJ’s that I watched and studied every week— Charlie Chan, Mike 2600, Needles, Da Fly D-Ex, K9, Crucial…I know I’m leaving folks out that I love dearly, but I gotta stop somewhere. There’s so much DJ talent in St Louis that folks don’t know about.

rubyhornet: What’s always been interesting to me about RTJ is that both Mike and El-P had decade plus careers before the group, and in some ways, were written off as underground rappers. So to see the success now has got to be gratifying on many levels. The life of a DJ is also a battle of persistence. Where were you in your career before this, had you ever thought of changing things up and doing something else?

Trackstar: When I started working with Mike, I had never considered giving up on my DJ career, but was definitely getting close to having to do some serious examination of my five-year plan. I’ve always been all over the place with a lot of endeavors going on—mixtapes, clubs, working with artists, radio, education, writing—so as working with Mike started taking more time I just scaled back a bit on all the other stuff—everything progressed really naturally and gradually. One of the best parts about the way this success has come is the timing—we’re all experienced enough to not mishandle the amazing opportunities in front of us. We’ve already made and seen so many of the mistakes and can avoid those pitfalls since we’re a little older and wiser.

rubyhornet: Lastly, I just saw that you have a video mega-mix getting ready to drop. When is that coming, any info you want to share about the making of this project. I can’t really think of another project like this one in which the touring DJ records every show and then makes a live-video mixtape.

Trackstar: Man I’m so excited about this thing. So I’ve recorded every show  for the last couple of years from multiple angles with my trusty GoPros—it’s a lot of work but like I said, I’m always doing too much.  Around when RTJ3 came out, I made a megamix of RTJ tracks from all three albums, playing acapellas over instrumentals from other songs, doing little DJ tricks and such. We were trying to figure how to present the megamix when I had the idea to make a DJ-tour-movie-mega-visual-mixtape…one of my best friends (who also did my Trackstar logo) is an incredible director, so I worked with his company Filmograph to put this thing together, and it is awesome. We have such a good time onstage and it comes through in the footage. We just dropped the second segment, and I can’t wait to get the whole thing out there to the people.