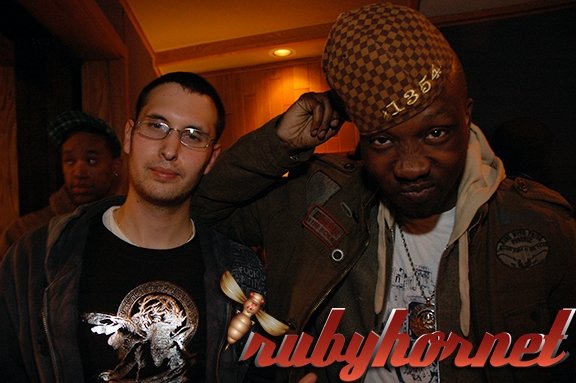 It’s Sunday night, the Steelers just beat the Cardinals for their record 6th Superbowl win and you can the official tees/hats are eco-friendly…Awesome. Anyway, this is number 2 of the RTC blog…I only got about 6 more months til I catch Naledge…For those wondering, T-Mobile managed to keep me on their network all week, they still have yet to offer me a proper apology though. I watched the Superbowl back in Hyde Park at my parents’ house, ate a lot of good food, and played with the dog for the first time in about 3 weeks. It was definitely a well-needed chance to relax. Last night RubyHornet and Brainiac Society took over Lava Lounge as part of dubFrequency’s Creme De La Creme. I DJ’ed with Willy Joy for the first time. For those unfamiliar, Willy Joy is pretty nice on the 1’s and 2’s and absolutely spazzed out at the Evil Olive on Monday…He’s also the only DJ I’ve seen that keeps a box of blueberries next to his turntables. People are bringing me shots, beer, champagne, and this dude has fruit, I gotta get on that tip (no homo)…Willy did his thing and then I got on in the late night slot. It was a lot of fun, and Lava Lounge filled up quite nicely. Thanks to everyone who came out including Simeon of The Primeridian, Noah Banks, Skyler, Fooch, The Smash Bros. Special thanks to Michelle and definitely Brian who had my back all night, lol…

This coming week is low-key for me DJ-wise. We’re hosting Angels N’ Kings’ Thursday night with Skyler, Hood Internet, and VIPJ, so check that out. My next true gig will be on the 11th at Sonotheque where I’ll be kicking off “Old School Vs. Now School” in which an older DJ pairs with an up and coming DJ in a friendly party rocking set. I’m very honored to be selected to represent the Now School and DJ with PNS….Who also shares a three lettered DJ name…Speaking of DJ names…For those that don’t know, my proper DJ name is Roosevelt Treasurechest. I shortened it to RTC because that fits a lot better on fliers, is easier to say, and a lot people just don’t have the verbal endurance so they made it into RTC themselves. I resisted this for a long time, but now embrace it. However, it is because of s**t like this that it is important for people to know that I am RTC(Roosevelt Treasurechest) and NOT this guy!

This week should be a busy one, as I’m finalizing Attack of The Brainiacs, which will be coming out very soon. It’s nasty and features tracks you’ve heard such as “Rock Top Fashions”, “Look At Them Hips”, and much, much more. On Wednesday my discography will get a major boost, as we’ll be releasing Guns N’ Doe, the mixtape I did with SC and Just Blaze (yep, that Just Blaze). The mixtape is actually mixed, and if you’ve heard my prior mixtapes then you know how I do…(s**t, if you haven’t heard my mixtapes you can get them all below). SC is one of the most skilled producers, and as Just Blaze says, ‘has some of the best beats you’ve ever heard and some of the best beats you’ve never heard…because somebody probably took the credit for it.” I leaked “Here We Go” featuring Mick Luter and Mic Terror last month, and last week I leaked an unreleased Young Buck/Trey Songz track. I’ll be leaking one or two more before the Wednesday drop, so stay tuned for that.

Speaking of my mixtapes…I got a call on Wednesday evening from GLC, who impromptly set up a video shoot at his crib with Travis and Russ from IKE Films. I don’t really want to say much about the video, because it will be coming out later this week, but I’m really psyched and happy with what went down. I’ve never been in a music video before, and always thought my first look would come via some kind of nodding/arms folded type of cameo, but my man GL comes through again and I actually have a real “part”. Hopefully you’ll see that real soon, and I don’t get made into a liar by being edited out, hahaha….

Question: Is it OK for a guy to be kind of intrigued by “He’s Just Not That Into You?” I’ll be honest, the movie looks kind of funny…Anyway, much more is going on this week, as we’re doing a mad dash to get everything set for SXSW. If you’re reading this and are interested in getting involved with us down there, or in any way resemble Scrooge McDuck and want to help us accomplish our dreams hit me up with an email…I’m also starting to put together the second installment of Just Listen You’ll Like It: The Love of The Music. This mixtape is going to be dope as people such as GLC, Naledge, K-Salaam & Beatnick, Keelay & Zaire, U-N-I, Mikkey Halsted, and 6th Sense are supplying some music and we got a lot of tricks up our sleeves in terms of presentation. If you would like to submit music please send it to Alex@RubyHornet.com…I’m also interviewing B Real later this week, which should be pretty dope.

That’s pretty much it for me, I’m about to go check out Shala at the CoolER, maybe I’ll see you there. Thanks for reading, and feel free to drop me a line with your thoughts, or hit me up on Twitter, Facebook, or Myspace…Also check out my interview with Rah from IHipHop, and I wasn’t playing…My mixtapes are below for your pleasure.