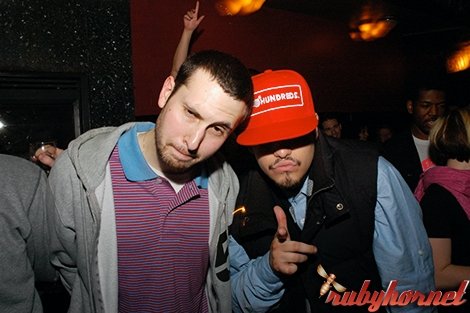 I want begin by saying…shut the f**k up…let me begin my saying…please stop tagging me in facebook pictures and videos that I’m not in.  This is annoying as hell, and I don’t really think it helps your cause.  Not to belittle myself, but you’re got going to get too many extra clicks on your computer camera made freestyle, or party pictures because I’m tagged in them…Now with that out of the way, let’s start blog #4.

I’m a little late in posting this week’s edition.  I normally post my own blog on Sunday night as things wind down and I get ready for the week ahead.  This weekend was pretty crazy and by 9:45 PM I was asleep on my couch, those of you familiar with my couch know how dope the micro-fiber is…Anyway, after Flight of The Conchords aka the best show ever, and 15 minutes of Eastbound and Down I was out.  Earlier in the day the RH crew hit a very chill photo shoot for a photography exhibit by Mireya Acierto in Dumbo Brooklyn.  The shoot focused on people behind Chicago’s music scene and consisted of many talented writers, designers, etc…and I was very happy to be included.  I had a lot of fun in the shoot and realized that I close/squint my eyes way too much in photos, haha…

I was already facing an uphill battle getting thru Sunday, as Saturday night we hit the Tonic Room for a Valentine’s Night party with DJ Izzo (the newest member of the RH crew), VIPJ, Naledge, and Mic Terror.  This party was crazy, and people definitey came to get down.  The after set was fresh as well, as VIPJ played a mix of tracks off Paul’s Boutique, new Cool Kids tracks, and Bob James, all without headphones while others argued about Muhammad Ali.  All in all a dope night, the pics will be up soon as well.

I feel like I’m DJing better than ever at this point, and Naledge and I have developed a strong chemistry during our live sets together.  As Jay-Z says,”‘turn the lights off…I’m in my zone.”  Last week I also played at Sonotheque with PNS from the Legendary Molemen Crew.  It was great to build with such a storied and accomplished DJ, and I was truly humbled when PNS stayed for my set and let me know that he respected my style and craft.  On Thursday I hit Angels and Kings for the first time, which was cool as well.

While at Angels and Kings I got an email from GLC, who’s become a good friend and a Big Brother to me.  The email simply contained an embed code for his video “Take It Off” from our mixtape together, Similar To The Letters.  I actually make quite a nice cameo in the video, and it’s not the arms folded-mean mugging-nodding type of cameo that is mostly reserved for DJ’s.  In fact I could say that I have a “role” in the video that in integral to its plot and storyline, lol…Bun B is in it too, so I got that going for me.  Check it out below…

This week I’ll be setting up shop in the studio within my studio, haha and banging out the final version of Chicago Picasso, the solo mixtape from Naledge of Kidz In The Hall.  This mixtape is no joke, and I’m thankful to get the opportunity to be involved and mix such a dope project.  The Heavy Hitter Timbuck2 co-hosts, and it’s also great to be part of a project with him.  The mixtapes features 20-plus tracks from Naledge, and features guests such as Jay Electronica, Chip Tha Ripper, Rhymefest, GLC, Mick Luter, Fooch, and a very very special guest on the “Look At Them Hips” Remix that I can’t even tell you about…Just trust me, this is a 2009 mixtape of the year finalist!  It’ll be out on iTunes soon.  You can also keep up with Nalege right here…This is the spot to see all that’s going on with him.
I’ll leave you with some things to look for on RH this week…We just did a very sweet First Look on singer Melanie Fiona (props to Kosha Dillz). Very soon you’ll see a fresh interview I did with sneaker customizer, Sole Junkie, as well as a Freestyle In The Park with B-More’s Y-Love.  Tomorrow I’ll be putting up an interview I did with B-Real.  I’m really proud of this interview because for one, I didn’t ask any cliche questions about weed, and actually got information that no one really knew before i.e., did you know that Adrock, B-Real, and Q-Tip seriously contemplated a super group of nasally emcees?  I didn’t either, but that’s just part of what B told me during our talk…Check for new reviews, RH Inspired By, music and all that this week, and if you’re out tonight, stop by Crocodile Lounge where I’ll be kicking it with Vyle, Skyler, and anyone else that shows up…
That’s it for now, I’ll leave with a couple tracks that I posted over the last week that have made their way to my set and I think you’ll like:
Asher Roth: “I Love College”
This dude is the truth…I’m not even going to front this takes me back to Bloomington in the spring time.
Wale: “Nike Boots” Cam Jus Remix
My favorite remix and version of this track.  Love the changes in the beat, really gets the party going.
The Boy Least Likely To: “Every Goliath Has Its David”
Our newest writer, Schwerve is killing it on bringing musical diversity to RH.  This is track he put me onto and I’m loving it…
Till next time, stay up.
RTC