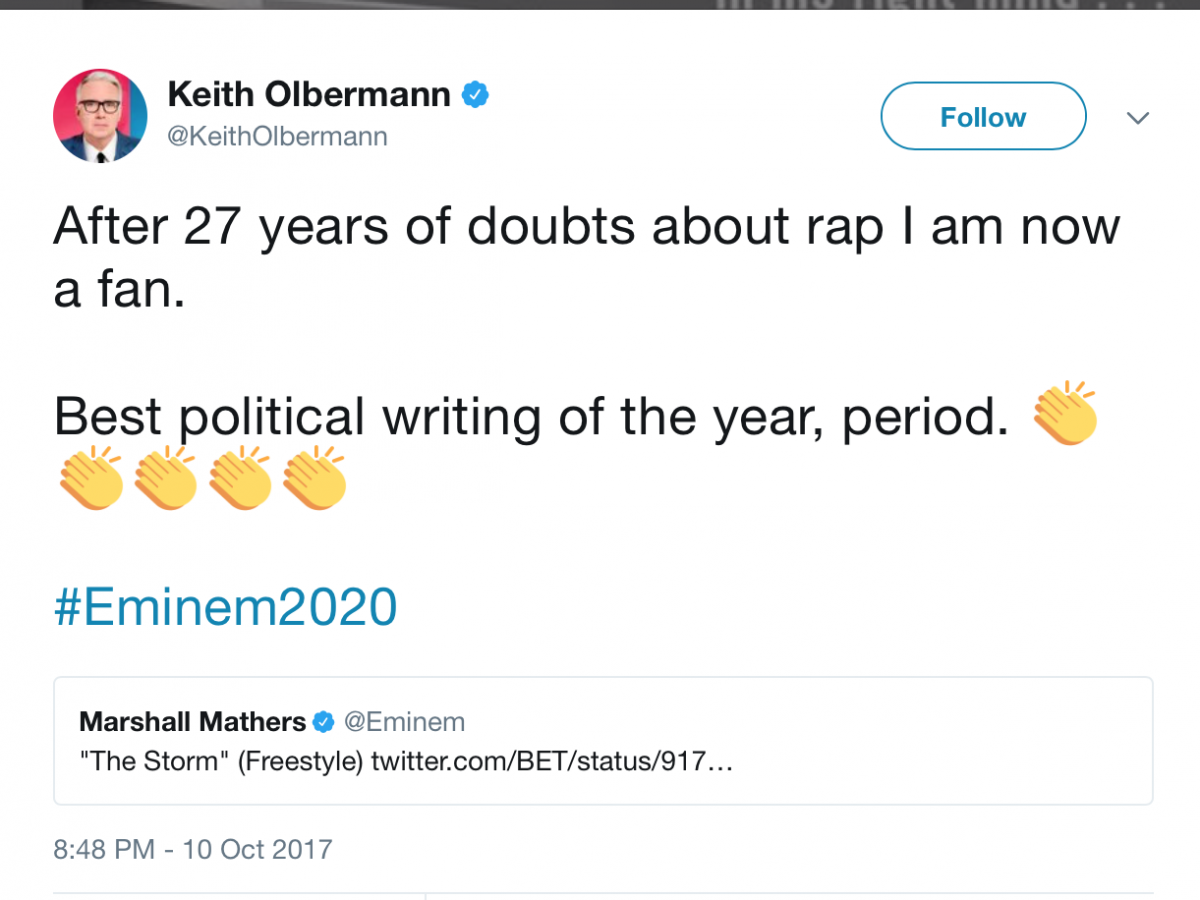 Man… I know, I know, I’m late. All the Eminem BET Cypher discussion happened last week. We’re passed that now. I’m not really here to add another think-piece about Marshall Mathers and his Anti-Trump performance, there are plenty already out there that make points way better than I could.

What I do want to write about is fucking Keith Olbermann and his smug comment that Eminem’s freestyle removed 27 years (?!) worth of doubt that he had about rap music. He never fully explained what the doubt centered on, so I can only assume he doubted it as a genre capable of important social messaging? Maybe the doubt was about a rapper’s ability to hold political thoughts? Keith, did you doubt an emcee’s desire to pay attention to current events?

That comment and the way he made it – as if his tweet provided some sort of holy and sought after validation on rap music – really bothered me. Oh shit, Keith Olbermann is on board?! I think we got something with this hip hop shit after all. GTFOH Keith. Seriously.

I am a big fan of your videos on GQ and your persistent stance against Donald Trump. But you continue to deliver that message with a tone of arrogance and cockiness that is extremely off-putting. This tweet you made is a prime example of why people don’t fuck with you…

But, yo, now that you have no more doubts about rap music, I have a secret for you – rappers aren’t just rapping about Donald Trump! Shocking right.

What if I told you that Hip Hop music has centered on societal critiques since its inception – gasp – over 40 years ago! What if I also told you that there are songs about past presidents too. Hold up Keith, did you know your boy Eminem actually made an anti-George Bush song back in 2004 to inspire people to vote for John Kerry? Maybe if you were paying attention and shared that one, history would have played out a little different.

Anyway, Keith, here’s a little playlist I made literally in 5 minutes without even really thinking. The playlist contains Hip Hop songs that address everything from politics to healthy eating, from police brutality, racial inequality, zealous patriotism, xenophobia and general complacency Check this out, and let me know what you think. Isn’t crazy how deep this genre gets?

To our readers – please hit us up with more songs that should be added and lets make this a collaborative playlist.