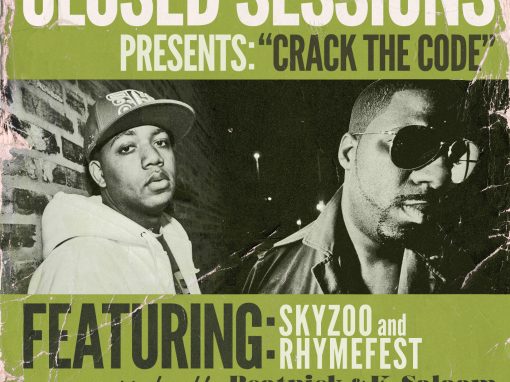 Closed Sessions Vol. 1 will be available for free download 3.2.10 at www.ClosedSessions.com

I really dug into Skyzoo’s material while making the first Brainiac Mixtape with Naledge. He put two Skyzoo tracks on the mix, I was more than impressed. I went back into Sky’s catalog and eagerly awaited the release of his debut LP, The Salvation. Shortly before the album’s release, I had the chance to interview Skyzoo and he told me that he heard about Closed Sessions, and our Dimes and Dozens party in which we bring out of town artists into Chicago and have them perform at our monthly event. He expressed interest in doing the same, and I was definitely with it. We organized a show for Skyzoo at The Darkroom, and setup a Closed Session for him the following day. Virgil and Ruben took Sky all around the city before his show, and when he hit SoundScape we could all tell that Chicago had made an impression on him. Rhymefest ended up just being at the studio during Skyzoo’s session, the two hit it off very quickly with help from this K-Salaam and Beatnik track, and the concept for “Crack The Code” was born. Skyzoo’s verse centers on the intricacies of Chicago, while Rhymefest raps about the nature of New York City. It’s an homage to two great homes for Hip Hop, and a pairing of two great emcees.

Download the song for free below, and look for the full Closed Sessions Vol. 1 to be released 3.2.10