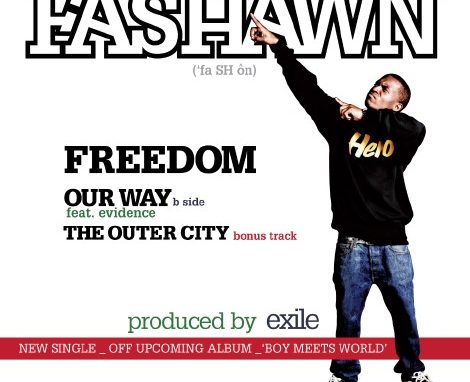 “f**k snatching purses, I’m better at spitting verses, so this is dedicated to the blue collar worker.”

Those used to the harder joints from Fashawn will be pleased as he adapts his urgent style to a more relaxed beat.  “The Outer City” (prod. by Exile) is a day in the life type track, displaying Fashawn’s ahead of his age lyrical ability.  Not just punch lines, Fashawn tells a story on “The Outer City” that conveys sensibilities we may sometimes reserve for someone older.  We highlighted Fashawn quite a bit ago in a First Look column, and I’m not surprised at all about the emcee’s growth and production.  His debut album is, Boy Meets World, is on the way and will not feature “The Outer City”.  You can download it here and also get it as the b-side to Fashawn’s Itunes single, “Freedom”

We turn our attention out West for this edition of RH First Look.  While L.A. and The Bay take the