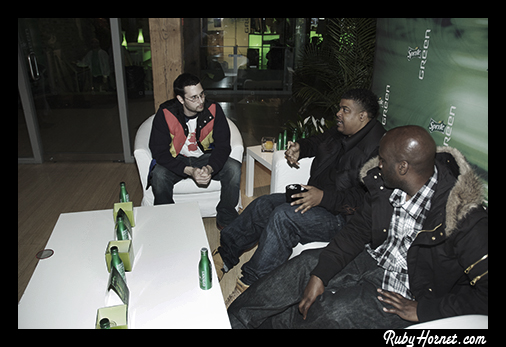 I definitely learned some valuable lessons over the last week about how the music industry, and the Chicago “scene” works in particular.  Ups and downs are a normal part of any profession, but for anyone who rides a high too much or lets a down drag them way down, entertainment, fashion, music, can be a tough road.  I’ve learned the hard way about both, and currently don’t get too gassed when something goes right, and have learned to shrug off something going kind of wrong.  Another thing that I’ve seen is appearance substituting for work, and when that happens, and you get caught up in going to all the parties etc…your work, or at least my work, my writing, my interviews, my networking, can and does suffer.  This weekend pretty much put all of that into a microcosm for me, and on the other end of it now, I feel like I’ve regained part of myself, the part that wanted to do all this in the beginning.

Here’s what went down, without giving too much away…On Thursday a friend of mine came into town.  He’s my best friend, and in no way connected to the music/entertainment industry.  His presence highlighted just how deep I’ve gotten into this industry, as well as how far I’ve kind of let other relationships and obligations slip away while working my way up the ladder and building my career.  We went out to Empire for Mano’s bday (Happy birthday again homie), and it was pretty dope.  What’s funny is that various people would approach me, give me dap, and keep moving.  My friend would continually say, ‘an introduction would be nice.’  I had to tell him over and over again, ‘I don’t really know that guy…I’ve only talked to that girl a couple times etc…’  He didn’t really understand it, no matter how I explained it to him.  That’s not to say that I don’t have real friends in this business as well, those of you that fall into that category know who you are anyway, but we all must admit that part of this business is just being seen, and business and pleasure mix often, sometimes with good results, sometimes not too good.  For me at least, I let myself get a little too caught up in it, and it was overshadowing what I really love to do, which is read and write about music, interview artists that have inspired me, and express myself through mixtapes and DJing parties.  I’ve never been the type of person to care about who’s f**king who, what brand of clothes people wear, or any of that s**t.  Some of you all that are my peers in this music thing have literally been my peers in elementary school (Ray), high school (MPA), and even college (IU), and it’s always been about connecting to the art for me.  I may wear some dope clothes, or shoes, but really, it’s by accident.  I pick up s**t that I think looks good, but I can’t tell you the name of it.  And honestly, I find comfort and take pride in knowing that when someone does come up to me, or tells me they’ve heard of what I do, they want to talk to me about something or invite to some event, it really does come from the work I have produced, the track record I’ve built up, and the name I’ve developed.  It doesn’t come from who else I know, what I’ve been wearing, or which girls I mess with.  And when it does, it’s time to really take a step back.  Reality TV, blogs, Facebook, Twitter, all gives us a microphone and platform, but in a way, it also provides a false sense of celebrity, and sense of accomplishment without actually accomplishing anything.  We’ve come to equate getting drunk and acting stupid with skill and we all know people who are “Facebook Famous”…It’s cool if that’s your thing, but it’s really not mine, and it took this weekend, being out of Chicago for a little while, to remind me of that…

“The TV Got Us Reaching For Stars, But Not The Ones Between Venus And Mars, The Ones That Be Reading For Parts.”

Talib Kweli: “Get By”

I went home early on Thursday night in order to be ready for a 6AM wake up call and ride out to Madison, WI to link up with Cali’s U-N-I.  I’ve been a U-N-I fan since last year when we featured them on the site, and have built with Thurz and YO, and we really consider them “RH Artists”, ones that we respect for their craft and really champion to succeed.  Anyway, we were meeting them at the UW in order to bring them back to Chicago for a show at Lava Lounge.  There was a mix up and the 11AM time that we were all provided with was actually 11 PM, so about 3/4th of the way there, at 9:30AM, we got a call saying we had more than 12 hours to killl before the show and that we would be spending the night in Madison.  Although I was a little upset about having to get up early, as well as leaving my friend from out of town in my apartment with really nothing to eat but a box of matzah, some veggine buffalo wings, and 8 minute Indian food, there was never a choice.  This was my job, and the job now required me to spend a day in Madison, and I was actually happy to do it.  It was great to be in a town where no one knew me, where I was a guest, and that was much slower paced.  We linked up with Thurz and YO, had a chill lunch, did a really good show, and got escorted around by some cute college girls.  We randomly ran into Hollywood Holt, who was in town for a different reason, and got to link with DJ Benzi who was there as well.  The parties were dope and there was no, ‘I can’t talk to this dude, cause he’s beefing with my friend…I’m gonna ignore this girl cause she texted me on some bulls**t….This dude snubbed me, f**k him…This girl hooked up with me, and my friend from high school, f**k her…”  No, none of that, and it was great. I hate walking around anywhere, any party, any club, and feeling like I need to change the way I am because of someone else.  As my dad always said, “never let anyone else determine your actions,” and his voice plays in my head a lot, as I’ve failed to truly heed his advice at times and have never gone home happy in those instances.

On Saturday U-N-I came to Lava Lounge and it was a lot of fun.  There were some sound issues during their performance, but overall the party was fresh and the bar was packed as I finished my set and they closed up shop.  We took them out to Le Passage after that and it was a very chill night.  But it could’ve gone better, and it reminded me of the growth and improvements I still need to make at my CRAFT, not at being seen at parties and events, cause if I slip up and stop doing good interviews, start doing whack sets, and don’t complete mixtape projects on the table, everything I’ve built up can easily disappear.  And if that does happen, I want it to be because of me, not because of some gossip, or partying, or girls, because of me and because I tried my hardest and it just wasn’t good enough.  I do feel really lucky in a way that my work speaks for itself, and for all the dumb decisions I’ve made, I continue to improve and recieve new opportunities.  And as I approach another birthday (May 2nd @ LAVA Lounge!) I feel kind of back on my grind so to speak.  Before my friend left, he asked me why I did everything that I do, and what I really wanted.  I didn’t readily have an answer by the time he left on Monday…

But, shortly after he left I did an interview with Pos and Dave from De La Soul, a group that literally changed my life when I bought their debut album 3 Feet High and Rising while on a school trip to London.  Their music is what inspired me, and drove me to actually be sitting in that chair next to two of my favorite artists.  I knew the interview went well when it started with Dave telling Pos, “doesn’t he remind you of Stretch Armstrong”.  It reminded me why I do all this, it’s really because I love it.  And that’s why RubyHornet runs, why I get paid to do what I do, why GLC picked me to mix his last mixtape, why Dave Jeff didn’t laugh at me nearly 4 years ago when I introduced myself to him as Roosevelt Treasurechest, why Naledge has made me a part of his upcoming projects etc….And I lost site of that for a minute…

I was cleaning out my old computer and came across a poem I wrote a couple months ago about been stressed out and not having free-time.  It was just a couple lines, but really summed up what I was feeling again so I decided to finish it.  I present it below, as I feel it really captures what I’m trying to say, and I hope that someone feeling the same way can gain something from reading it…

I need peace and quiet, but the people want a riot, and they’re all vying for my time so I wonder how much I get, there is no health insurance means no therapy sessions, and it’s definitely effecting how my records keep spinning, you can live through struggle, but when your struggle is living, you’re just a shortstop in the outfield lost out of position, so you keep second guessing and making bad decisions, that don’t reflect your values, but this kool aid we’re all sipping, and you hear the lies so much that they begin to mirror wisdom,  and you’re life mirrors something that you never envisioned living, it’s beautiful and ugly, it’s cheap but yet expensive, it’s dishonest but the truth is, it’s the nature of this business, and don’t
mix business and pleasure is just a contradiction, when your success is measured by going out to parties and f**king b***hes, til you’re work suffers and you’re shouting ‘f**k these b***hes’, you keep searching for the light, but they’ve taped over all the switches, and you learn who your true friends are and keep all the rest at distance, and it’s good to have your
bubble burst and start swimming in the liquid, till you get back to being fluid, back to do it how you do it, the thing that made them want you, and made you want to prove it, so you fall back in love with life, cause you don’t wanna lose it, when you’re making the right moves your moves become a movement, and without the people a movement is often useless, so you find some comfort in the people, you find comfort in the riot, but this time with the perspective that you don’t know it until you try it…So I guess that I decided, that I also want a riot…